Balancing My Opposite Identities 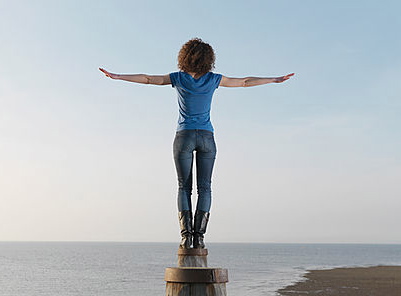 A few weeks ago I was asked to describe myself in one word. Without hesitation I said “whasian,” which is a combination of the words “white + Asian.” I said this because my father is white and my mother is Korean, and I’ve always felt that I’m the exact mix of my very culturally different parents.

My father is a laid back, funny country boy from Oklahoma, and my mother is a very disciplined and serious woman from South Korea. They met when my soldier father was stationed in Korea during the Vietnam War, and though it took some time for my no-nonsense mom to warm up to a silly and strange American, she eventually did. Then they moved to America, and the rest is history. So, to sum them up, if you Google the term “opposites attract,” you’ll come up with a picture of my parents.

Although I was raised mainly by my mother, my father was around for some of my childhood before they divorced. During those years my brother and I would visit our grandparents in Oklahoma. We didn’t care that we were two little Asian kids in a very small country town. We went fishing and camping and ran around with our shoes off. We developed a small town carefree attitude, yelling at the top of our lungs with excitement, not afraid of who was around to hear. It was also during these visits that I became obsessed with my grandmother’s mashed potatoes and gravy and my grandfather’s fried catfish, both of which are staples of Southern cuisine.

Then when our summer vacation was over, we’d go back to our more urbanized hometown of Newport News, Virginia, and I’d go back to being a good little Asian student, slightly high strung with my studies and super shy and quiet. My mother’s instant mashed potatoes were no match for the made-from-scratch potatoes of my grandmother, and almost every one of our meals consisted of rice and spicy kimchi. Instead of riding a bike through a creek or driving to a campsite in an RV, I’d ride my bike through my developed neighborhood or ride in my mom’s Jeep Eagle Premiere to a coin laundromat.

That’s just how my extremely opposite life was, and that’s how it has always been.  My parents come from two vastly different cultures, but both of them have shaped me as a person. In fact, their opposing cultures have become my entire identity, and many times I confuse people because some of the things I do or say are things that you totally wouldn’t expect because I look mostly Korean.

Some of these things include:

Last weekend I really wanted a heaping plate full of homemade biscuits and gravy with a side of hash browns for breakfast. I usually crave this exact meal at least once a week. It is another one of my grandmother’s specialties, and it’s about as southern as you can get.

Enjoying biscuits and gravy and home fries in North Carolina.

The week before I wanted bibimbap (a Korean mixed rice dish) for breakfast, so I made it, and it was so spicy that I couldn’t feel my lips for an hour. Yes, I ate rice and kimchi for breakfast religiously when I was growing up, and I still do today. I don’t care that my husband locks himself in his room and burns several candles when I make kimchi soup on Sunday mornings. That’s just how it is. He knows that if I had the choice to eat out for breakfast, we’ll either go to Bob Evans for a country biscuit breakfast or to a Korean restaurant for spicy noodles.

Enjoying a Korean feast for breakfast at my mom’s house.

I’m not ashamed to say that I have two vastly different types of XM music channels programmed in my car: old school hip hop and original country. My love of old school hip hop groups like De La Soul and A Tribe Called Quest stems from the soul-inspired Aretha Franklin and Diana Ross albums that my mother listened to when I was younger. Motown was the first type of music she fell in love with when she came to America. My appreciation for older country stars like Patsy Cline and Johnny Cash obviously comes from my dad’s Oklahoma roots. One minute I’m driving through a Baltimore city neighborhood listening to Lauryn Hill, and the next I’m listening to George Strait.

Some days I just want to grab a fishing pole, sit on the side of a lake and fish. Or I want to take a hike to the top of a mountain and enjoy the view. This clearly comes from my childhood visits to Oklahoma, where I learned how to appreciate the outdoors and be away from the bustle of city life.

Fishing on my birthday.

Then at other times I want to be indoors do what most Koreans love doing: cook Korean food. For those of us who grew up with a Korean mother, you know that most of her free time was spent preparing elaborate Korean dinners with every type of side dish, spicy soup and marinated meat possible. Even when my mother comes to visit me today, we have to make a trip to H-mart to stock up on ingredients so she can make a Korean meal that will last me for the entire week.

My mom making a tub full of kimchi.

My mother was a single Korean mother who often had several jobs, and she took great pride in all of them, just as most Koreans and immigrant parents do. She showed me the value of hard work and the importance of being independent. That’s how I approach every job I’ve ever held. I am very intense when I’m working, and I don’t always ask for help because I think I can do it on my own.  I’ve even been told at times that I need to chill out and take a break because I’m a workaholic. Then at other times I’ve been known to channel my father’s silly southern side, and I’m cracking “that’s what she said” jokes because I truly believe that people need laughter in their lives in order to survive. Instead of letting a stressful project get me down, I’m planning the next happy hour at a place with good craft beer. Go figure!

I’ve always considered myself an introvert because I’m shy, I don’t like attention and I keep to myself. Like most Koreans, I always try to be polite and I very much respect my elders.  I don’t’ always speak my mind because I like to avoid conflict, and I can be very hard on myself when I don’t do something right. On the other hand, I can be an extrovert, extremely funny and throw out the “Southern charm” when necessary, especially when it comes to work-related matters. I can also be bold and speak my mind when I feel that it will help someone in need. How shy or outgoing I am really depends on the situation and the people around me.

As you can see, I really have adopted the culturally opposite identities and personalities of my parents. Sometimes I think I’m just plain weird for doing or thinking two completely different things, but then I realize that’s who I am, and  I’m proud of where I came from. Regardless if we want to or not, most of us take on the same characteristics or habits of our parents, and when cultural heritage is involved, that influences who we are even more. I’ve learned to embrace my opposite heritages, and I try to educate others about it whenever I get the change. That’s the true beauty of a mixed nation!

My husband and I with my parents on our wedding day in 2012.

3 responses to “Balancing My Opposite Identities”