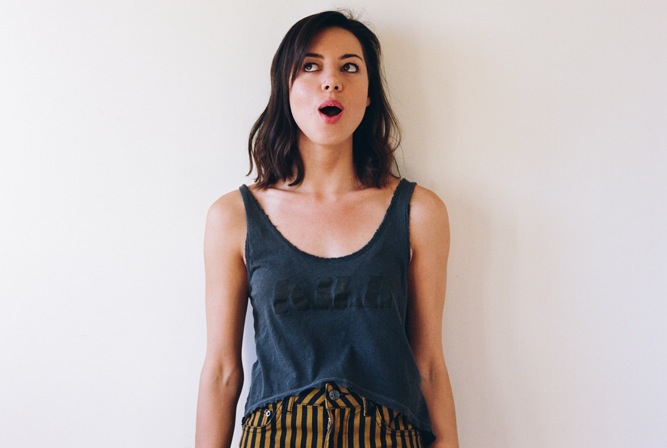 I’ve always been a fan of mixed race individuals because I myself am the product of two parents from different countries. I’m the daughter of a white father from Oklahoma and an Asian mother from South Korea. I love the fact that mixed-race America grew 32 percent from the years 2000-2010, and that it continues to grow as people learn to look beyond skin color and into the true heart and soul of a person. We’re a nation of blended cultures, constantly learning from one another, and that’s what makes us an inspiration to other countries.

Speaking of inspiration, there are currently five mixed race celebrities who are inspiring me to laugh, dance and feel good on a daily basis. Here they are:

Plaza plays the expressionless, sarcastic and apathetic April Ludgate-Dwyer on NBC’s Parks and Recreation. She’s the complete opposite of the show’s peppy main character Leslie Knope, played by Amy Poehler. I think that April is a great character because she represents a large portion of workaholics who are uninterested in their jobs, who have weird, dark obsessions and who are constantly throwing out witty one-liners. Although she acts annoyed with the world the majority of the time, when it comes to being a supportive wife and friend, she always seems to let a little love shine through.

I first started watching Dwayne “The Rock” Johnson back in the late ‘90s when he was the arrogant “People’s Champion” of WWF. I was addicted to Monday Night Raw, and even though he was a huge jerk, he had a charisma about him that kept me glued to the television. When he first made the leap to film star as the Scorpion King in The Mummy Returns, I wasn’t thrilled at all. But he was funny in The Other Guys, and he’s gradually building a name for himself as a Hollywood actor in films like G.I. Joe Retaliation. Plus, he was a hilarious host on Saturday Night Live, and he made a stunning comeback to wrestling earlier this month at Wrestlemania 29.

Here’s a roundup of skits from The Rock’s first appearance on SNL: (YouTube link – http://youtu.be/tKuLtK7HKJ8)

I’ve been a fan of hip hop music since the mid ‘80s, so it’s only natural that I would choose a celebrity who is not only mixed, but who also has one of my current favorite songs, “Started from the Bottom.” Aubrey “Drake” Graham is a Canadian rapper who started his career acting on Degrassi: The Next Generation. He released his first mixtape in 2006, and since then his career has skyrocketed. He has worked with artists such as Rihanna, Eminem, Jay-Z, Kanye West, Lil Wayne and Rick Ross, and has already sold five million albums worldwide. If you haven’t heard of him, just turn on your radio. You’re bound to hear a song that features him singing a catchy hook.

Within the last few months I have become a huge fan of IFC’s sketch comedy show Portlandia, mainly because of its two creators/stars, Fred Armisen and Carrie Brownstein. Armisen is best known for his nutty characters on Saturday Night Live, but he and Brownstein have created many wacky and weird characters on this show that remind me of the awkward brilliance of The Kids in the Hall (which Brownstein has said is one of her favorite shows). Armisen flawlessly transforms himself into a feminist bookstore owner, a gullible bed and breakfast owner and an angry punk rocker on the show, and I can’t help but chuckle every time he and Brownstein play “Fred and Carrie. “Please watch this show if you can. You won’t be disappointed.

One of my other favorite television shows is NBC’s Community. It’s a show about a gang of community college misfits who are all a bit weird and strange, and who have very different personalities and habits, yet they somehow remain close friends. They’re actually the perfect example of a “Mixed Nation.” My favorite characters are Troy (Donald Glover) and Abed (Danny Pudi), the nerdy best friends who are obsessed with pop culture. Abed is an encyclopedia of movie and television knowledge, is socially awkward and often travels to distant places in his imagination. He’s basically the male version of me in middle school, so maybe that’s why I like him so much. Despite his “unique” tendencies, he’s often the glue that keeps the gang together.

Here is an amazing compilation of Troy and Abed moments, set to them singing “Somewhere Out There” – (YouTube link – http://youtu.be/h8ja1SVlnbo )