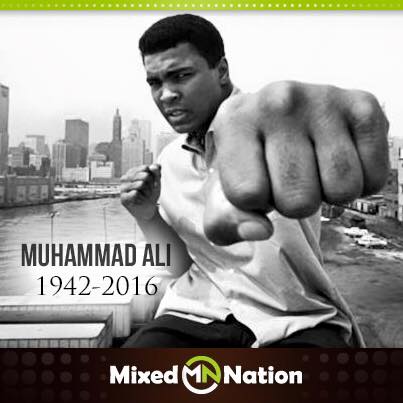 On Friday, June 3, 2016, the world lost a great humanitarian, millions lost a lifelong hero, my city lost a beloved son, and I feel like I lost a member of my family. Muhammad Ali fought his last battle; and he won. I was at a fundraiser for a local, Christian nonprofit in the Muhammad Ali Center the night he passed. The event began with a cautionary announcement “Reports are saying Muhammad is critical condition.” I sighed deeply. The room silenced. What followed was a touching, thoughtful prayer recognizing the gift that Ali was to our world and our city, and offering our support “as he begins the graceful dance that may be his final fight this side of paradise.”

We prayed as a family.

I was blessed to have several minutes alone in the lobby inhaling the spirit of the wonderful center he created. As I left, knowing I would never cross that threshold with Ali earthbound, I offered a prayer, took a few photos, and said my good-byes. His death felt personal. When I drove out of the garage to see news trucks pulling up, I burst into tears. The dark night grew darker and the world got heavier as his courageous fight became a victorious flight.

We cried as a family.

I took vacation days so my children and I could bear witness to the greatness that was the Greatest.  We were fortunate to visit his newly opened boyhood home in the Parkland neighborhood of West Louisville, participate in the I Am Ali children’s celebration at the Kentucky Center for the Arts, and lay boxing gloves at the memorial at the Muhammad Ali Center.  We were blessed to attend the Jenazah prayer service at Freedom Hall, stand with thousands to honor the processional as the 20+ vehicles weaved through the city heading to Cave Hill Cemetery, and later that day attend the memorial service at the YUM Center.

We visited as a family.

A memorial for the late Muhammad Ali is seen at his childhood home in Louisville, Ky. The home is open to the public.

I was proud of my city and humbled by the opportunity to give the gift of Ali to my children. One of the best parts of this week was the history lesson it offered, not just about the man, but about our nation.  To comprehend the legacy of Muhammad Ali is to explore the history of African Americans, to study the evolution of civil rights, to grapple with the intricacies of religious identity, to examine the plight of the marginalized, and to truly consider the life of a Black man on this planet.  In one body and in one lifetime, he was the kaleidoscope of diversities that makes America the United States.

We learned as a family.

What struck me most about the events of the week, culminating in a majestic memorial fit for the Greatest, was how simply beautiful it was. The week redefined beauty. I love my city, even on its worst days, but this week was something magical.  It was a template of a town full of rich colors, warm sun, and reverent energy. In a world so diverse, in a country so divided, in a city so determined, we became greater because of The Greatest. The image in my head is like a postcard from Heaven. It reminded me of the way I feel when I see multiracial families – hopeful, connected, understood.

We loved as a family.

This is the world Muhammad fought for as a young man, the world he crafted as an ambassador and humanitarian, and, ultimately, the world he wanted us all to live in.   And I wholeheartedly believe it could have only happened in Louisville, Kentucky. Hands of every shade and hearts of every size united in a common sense of our own life and death. The story of Muhammad Ali is the story of this city and of this nation, this multiracial, multicultural, multiethnic, multifaceted mixed nation.

We live as a family.

The memorial homegoing service was like an Ali fight – the culmination of years of preparation, the anticipation of seeing something you will never see again, the overwhelming sense of awe in the presence of greatness. Thousands of people, seated quietly in the dark with security lights like candles holding the reverence. The stage awash with white flowers, an American flag and an Olympic flag, was lit with the expectancy of the thousands of hearts in the space.  As the Ali family entered, a collective sigh. We held our breath as they held our grief.  We prayed, laughed and listened to those closest to Muhammad share pieces of their heart and their hurt. We grew closer to him and to one another.

We celebrated as a family.

Each person in that venue, each person around the globe listening on the radio or watching a satellite feed was a part of something great, a part of something greater than ourselves, a part of The Greatest. We witnessed a revival of his fighting spirit. We witnessed a reminder of his fatherly heart. We witnessed a remembrance of his faithful soul. We witnessed our own sense of humanity expanded before our very eyes, like the magic tricks he was famous for pulling.  For a moment, it seemed the world stopped, turned its attention to Louisville, Kentucky and remembered a forgotten truth: we are one family. Despite all the stories and statistics, besides all the sound bites and iconic images, I realized that Muhammad Ali was the Greatest because of this one thing: as a nation, he challenged us, as a people, he cherished us, and as a species, he changed us.  Ali did it in his life and again in his death. And he did it with love every step of the way.

WE are greater because he was The Greatest.

We must carry on his legacy… We Are Ali.