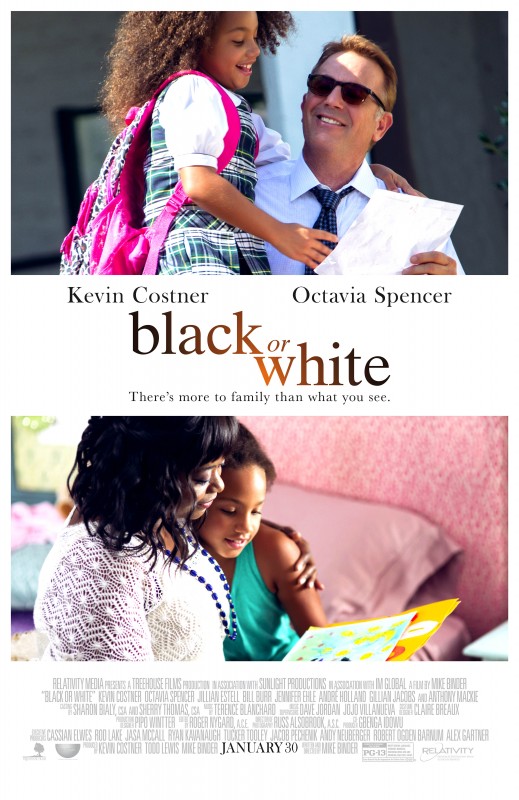 “Inspired by true events.” That’s key to an appreciation of the recently released movie “Black or White” starring Kevin Costner, Octavia Butler and Jillian Estell (as their biracial granddaughter, Eloise). Yes, the movie was loaded with stereotypes of black families spilling out of houses in the hood, led by a fearless black matriarch ready to defend her family and wayward son. And there were similar stereotypes of the wealthy, white family surrounded by their colorful assistants (maids, secretaries, tutors and drivers) sending their kids to prep school and drinking away their loneliness in the proverbial “big house”. That’s what you will hear about, but that’s not what I saw.

People are going to see this movie and get up in arms over the stereotypes and continued portrayal of “white is right” in Hollywood movies. Some people will have a problem with this film, especially if the lens through which they are watching is on one “side” or the other. I am biracial.  Like Eloise, my white parent struggled with my head of curls. Like Eloise, my black family was large and full of life. I watched the film hoping to see a mixed story, but expecting to see, well, a Black OR White story. I looked, as I always do, with “mixed eyes”. I wasn’t there to criticize the white grandfather or coddle the black grandmother. I was there to bear witness to the little mixed girl on screen and the little mixed girl in me. I wanted more than I got, but I got more than most will bother to see.

This was inspired by true events and therein lies the value. This is Eloise’s story even though it’s not Eloise’s movie…although Jillian Estell does steal the show! I am black enough to be offended by certain portrayals and white enough to cringe at others. But I am mixed enough to recognize what this film is truly about… the true story of two families, united by their love of a little girl. For that reason the film has value to me and all little mixed girls and boys who will finally see themselves, if only for a minute, on the big screen.