Zendaya: No Dread in Her Locs 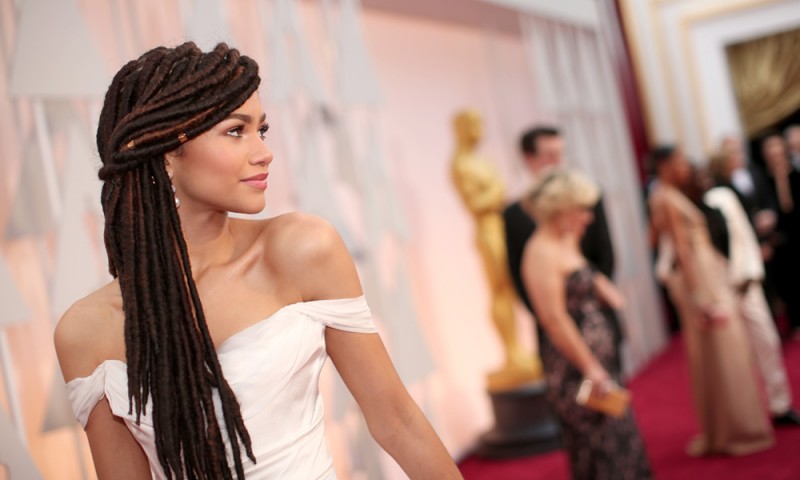 Who did my 10-year-old see when Zendaya walked the red carpet at the Oscars? A modern day Disney “princess” from one of his favorite shows.  I could tell from his crooked little smile, he thought she was pretty…in the way 10-year-old boys try not to acknowledge. Who did I see poised for the paparazzi? An enchanting young woman representing herself with grace and self-respect. When I learned of the comment by Giuliana Rancic suggesting that Zendaya probably smelled like patchouli oil or weed, I shook my head full of curls like so many others and paused. Wait, what? She looks amazing! I realize the point of these shows is to mock celebrities, but what’s to mock here? Why would that be the response to this graceful young woman? The E! Fashion Police assaulting a young, mixed teenager, ah, the irony.

I still remember seeing Lisa Bonet years ago donning her locs with pride.  A Cosby kid in the 1990s is the equivalent to the Disney star of today.  These young actors and actresses are on display as ideals, role models, and poster children for good ole American apple pie success. Wearing “not made for prime time” hair was a political statement then and now, apparently. Why is it when people of color wear their crown, some people feel compelled to knock it off?

The outraged reaction to the Rancic’s comment by social media made my mixed heart swell. Zendaya’s responses to the comment and subsequent apology blew my mixed mind. At 18 years young, she was well aware of her responsibility to all those offended by the statement and, more importantly, the impact of her response on all those teased for their appearance and for those who feel safe to do so. She responded to the attack on her body with her mind and from the heart. She was thoughtful, tactful, and truthful.

In her response to the apology, Zendaya quoted Dr. Martin Luther King Jr. “Darkness cannot drive out darkness, only light can do that. Hate cannot drive out hate, only love can do that.” She added “Let’s be the light and spread that love.” This is how you move the needle on prejudice, one light at a time. That’s how we at Mixed Nation do it too, celebrating diversity and promoting cultural harmony, one light at a time.

Zendaya deserves a tiara in her crown of glory for the way she demonstrated to all of us how to speak truth to the power of prejudice. Disney’s princess is now a queen.