Cesar Chavez: The Man Behind the Movie 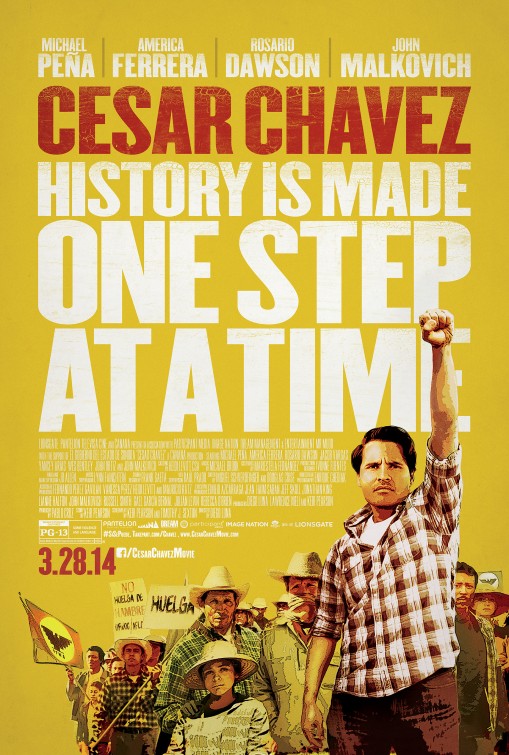 Growing up in California, I clearly remember learning about Cesar Chavez on the news around the time he passed away. Right after watching the recently released movie about him, I assumed I had been in high school because of how clearly I remembered that time in history. After doing some research for this article though, I realized I was only 13 years old the day he died (April 23, 1993),which makes it even more significant that it had such an impact on me.

In 1993, the gang culture in California was beginning to spread, gangster rap was blowing up, and the Latino youth of my generation were getting caught up in it. When Chavez died and the news reports highlighted reasons for why this man had inspired such positive social change, nonviolent tactics was an important one.  As a teenager, Chavez was a real life Latino hero to me, providing a sharp contrast to the usual stereotypical media portrayals of my culture that I had become accustomed to. The movie, directorial debut for Diego Luna, also highlights how strongly Chavez felt about nonviolence, going so far as to do a  hunger strike in order to motivate the farm workers to sign an agreement to only use nonviolent tactics in their union organizing efforts.

But to me, one of the most powerful things this film does is to focus on the strained relationship between Chavez and his oldest son, due to how dedicated he was to the United Farm Workers (UFW). Many male leaders of social justice movements have strained relationships with their children (and/or wife) because of how difficult it is to balance everything in one’s life, especially when one feels so strongly about such a worthy cause that is much bigger than all of us as individuals.  There is a particular scene in the movie when his son has a black eye from the fight he got into at school because he was getting picked on and being called racist slurs. When Chavez asks him who started the fight, the son tries to explain how he was getting harassed, but his father responds, “you always have a choice”, at which point the teenager rolls his eyes, and as he gets up to walk away from the conversation, he concludes, “see, I knew you wouldn’t get it”. Chavez sits there, deeply contemplating what his son has just said.

At that point in the movie, I could relate more to the teenage son than to Cesar Chavez. I remembered how my mom would tell me to just ignore people who repeatedly bothered me at school, but sometimes- especially as a teenager dealing with the pressures and immaturity of middle & high school- it really feels like the only choice you have is to fight. Although I did get into a few fights at school, learning about Cesar Chavez and how he organized to unite Latinos inspired me to not get caught up in gangs. I hated seeing Latinos kill each other over a color. I knew poverty and divide & conquer tactics were the root cause of the problem, just as it was with farm workers.

Although I find admirable that Ghandi, Martin Luther King, Jr, and Chavez all chose nonviolence in their respective struggles for social justice, I also strongly respect the brave leaders who did not receive such mainstream attention because they chose a more militant stance to defend themselves, by any means necessary- like Malcolm X and the Black Panthers. Most importantly though, I respect the fact that all of these leaders stepped beyond their own culture to stand in solidarity with other cultures.

But all of that progress took steps, which did not happen overnight. In order to be able to love others and see our struggles as one, we have to love ourselves first. Chavez inspired many Latinos-not just farm workers- to elevate their consciousness for a higher purpose. And once we recognize the value in cross-cultural collaboration, we must then be willing to compromise, to respectfully agree to disagree. Some of my Filipino friends were actually disappointed by the movie because they felt it did not focus enough on the Filipino influence of the UFW. Although I can understand their perspective, I think that the movie chose to focus more on the man Cesar Chavez was rather than telling the history of the UFW.

There are always improvements movies can make and there were many paths the production team of this movie could have taken, but I deeply appreciate how the end product I got to see is more about Cesar Chavez as a human being rather than as a social justice leader only. We get an insider look at what shaped his organizer style-which is what made him famous- but that story is really only the backdrop, the context for the real message. The true essence of this movie is to show us what a fair person Chavez strived to be and the father and husband roles he genuinely struggled to improve on as a man of his time and era. The struggle within us to find a healthy balance between family, community, ideals and reality are the real gems in this film depiction of the true life story of Cesar Chavez.