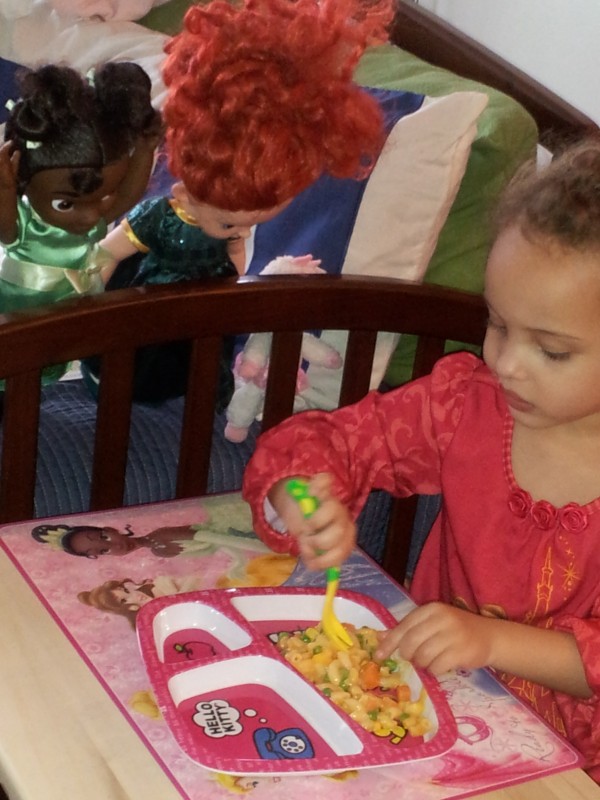 When my 3-year-old daughter first told me she didn’t want me to braid her hair, it was no big deal. I took out the spray bottle of water and leave-in conditioner. She would have a wet-n-go hair day.  A few days later when my daughter said, “I want straight hair like Elsa’s”, my stomach froze a little. Up until my daughter wanted Elsa’s hair texture, I had been happy that my daughter loved this independent, yet vulnerable princess-queen with superhuman powers and no interest in a prince sweeping her off her feet.  But when my daughter’s attachment to this heroine compromised her appreciation of her own curly hair, I wasn’t so keen on Elsa anymore.

By the time Elsa came on the scene, my three-year-old daughter had been trying to find a reflection of her identity in the Disney princesses for five months. Over the summer, she had asked me what type of Princesses Pocahontas and Tiana were as well as what I was. When I answered Native American for Pocahontas and African American for me and Tiana, she declared, “I’m African American like you.” But she hadn’t stopped looking for a princess with whom to identify because, although she has expressed wanting to be like Tiana who is “brown like mommy and grandma,” for over a year she has said about herself and me, “I’m white and you’re brown.”  I think my daughter  looks most like Belle (of Beauty and the Beast) and Sofia (the mixed Latina/Scandinavian princess of Sofia, the First) but recently my daughter has settled on saying she is most like Snow White and Jasmine (of Aladdin) despite having never seen their movies. Even though my daughter has light brown hair with blond and red highlights, there’s something she can’t put into words yet, that tells her she has more in common with Jasmine and Snow White than the lighter haired, fair-skinned Disney princesses. Until the request came for Elsa’s straight hair, I had only involved myself in my daughter’s search for the Disney Princess with whom she could identify minimally—I answered questions when she asked them.

But that request for straight hair just sent off an alarm of worry that my daughter was about to drop through a rabbit hole of disliking her physical features. So, I looked for a curly haired princess with whom she could identify. My aunt and I talked about giving her Tiana but like Tiana’s adult character in the movie, all the Tiana dolls have straight hair and Pocahontas and Jasmine have straight hair as well. Ironically enough, we settled on Merida (of Brave). My daughter hadn’t seen the movie yet so I downloaded “Brave”, and I pointed out to my daughter that Merida has curly hair like her own. She was quite happy about that, watched “Brave” nearly every day in the month between Thanksgiving and Christmas, often saying, “Merida has curly hair like me. I have curly hair like Merida.”

For Christmas, my aunt gave her a Merida doll and a Tiana doll. This not only gave my daughter a doll with curly hair like her own and a brown doll like mommy and grandma, but two dolls that come close to  representing her ethnic heritages since my daughter is Irish (Merida is Scottish) and African American.

Sometimes, I get trepidatious over which doll she prefers. I wonder if she is choosing Merida more often than Tiana and what that may indicate about her pride in her African American heritage.  However, when, while wearing Tiana’s dress and crown, my daughter  asks for Merida’s bow and arrow, and tells me with a smile and a hug, “Merida is pink with curly hair like me and Tiana is brown like you,” before pretending to be Elsa and ‘freezing’ both dolls with her ice powers, I relax in the face of my daughter’s self-acceptance.

Omilaju Miranda is a creative writer and book reviewer for the forthcoming (March 2014) nonprofit book review page Mixed Diversity Children’s Book Reviews www.MixedDiversityReads.org and the Facebook page Mixed Families, Single Parents, LGBT Parents Read And Raise Healthy Children https://www.facebook.com/singleparentsmixedfamiliesreadandraise. Most importantly, Omilaju is the mother of a Mixed Heritage daughter for whom she would like the world to be a place of social acceptance, understanding, and peace. See more articles by this author >