How I Learned to Love My Distinct Asian Features 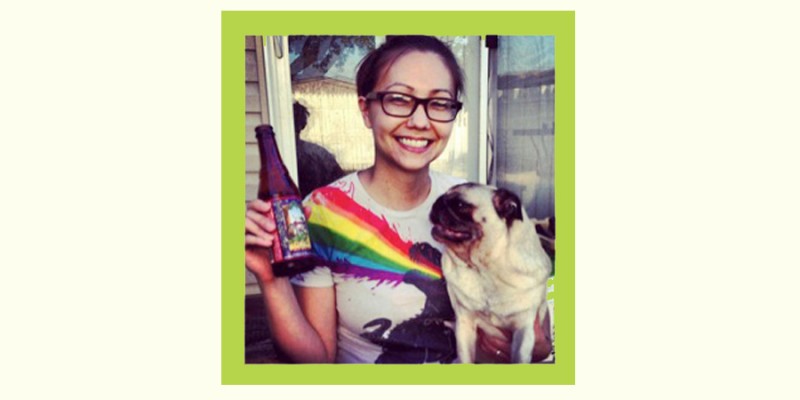 Although I am only half Asian, I’ve always looked more like my Korean mother than my white father. I’m definitely not complaining because my mother is 68-years-old and looks like she could easily pass for 40. She’s a beautiful, strong, single Korean mother who is my real-life superhero, and I’m proud to be a product of her Korean heritage.

However, it wasn’t always easy looking more Korean than white. When I was younger, in typical middle school mean girls fashion, I was called names like Kristi Yamaguchi and Connie Chung. When I visited my father’s parents in Oklahoma people would stare at me like I was an alien (the international and outer space kind). In college I would get laughed at because I got the “red Asian glow.” In the last ten years I have been asked numerous times if my eyes are opened or closed. To this day I still get asked how to make General Tso’s chicken.

All of these comments and observations used to really bother me, especially when I was younger and trying to find a sense of self. I wasn’t confident about any of my Asian features because I thought they just made me stand out and look like an even bigger nerd. But as I got older, and I gained a little confidence and an enormous sense of humor, I learned to laugh at and love myself, small eyes and all. Here’s how I did it in regards to these distinct features:

It’s a well-known fact that most Asians look much younger than their real age. I’m one of them. Now I’m not saying that this is a bad thing, because I felt pretty good when a Korean waitress recently said to me, “You look like you’re twenty. You have such a pretty forehead and no wrinkles!” Since I’m 33, that made my day, and constantly getting carded for alcohol also makes my day. But looking like you’re ten years younger isn’t always a good thing.

When I was in college I looked like I was still in high school, so obviously that put a damper on my “I’m trying to be an adult and get a boyfriend” phase. When I was a student teacher I constantly had to decline invitations to high school parties. During a recent phone call with a group of twenty-somethings who I freelance with, I mentioned the name Mark Paul-Gosselaar and only one person knew who he was. I’ve been put into the “younger generation” group by the more seasoned department members at work, who see me as the cutesy and hip social media person. Sometimes I just want to scream to them, “I was alive before cell phones! I used to own a typewriter! I love Hall and Oates!”

I’ve come to the conclusion that I’m always going to look much younger than my age, and people will always judge me for it, so I’ll enjoy it while I can. I’ve found only one grey hair on my head in the last few years, so I’ll continue to use the money that I save on hair color for buying CDs (yes they still exist) at thrift stores.

I admit that I have a problem: I’m obsessed with noses. I don’t know why, but a nose is the first thing that I notice on a person. I think the bigger and straighter and longer, the better. Maybe I feel this way because my older brother constantly called me “pug nose” when I was younger. I didn’t have a beautiful, straight nose with a high bridge that held up my coke bottle glasses. Like many Koreans, I have a small, slightly rounded nose with a flat bridge. It’s funny because my mother is actually one of the few Koreans who has a straight, high bridged nose. My father is the one who has a round nose, so I think that was one of the few physical features that I got from him.

So it’s my brother’s fault for giving me a “pug nose” complex, and for making me dislike side profile shots. It took a long time for me to get over it, but now I like my nose. Why? I’ve read way too many articles about South Korean parents forcing their children to get plastic surgery, and I’ve seen way too many surgeries gone wrong.  My glasses may still fall down because of my flat bridge, but my dog has proven to me that pugs are cute!

When I was in college you could often find me covered in the red Asian “glow.” It basically looked like I was constantly blushing or suffering from heat exhaustion. I would start to feel hot all over and my heart would start to beat faster. I later learned that my body was just reacting to the alcohol. This condition is called alcohol flush reaction, and over 33% of Asians suffer from this because they lack the enzyme Aldehyde dehydrogenase, which is known to break down alcohol. I guess I felt better knowing that this was an actual health problem, but I still got embarrassed any time I drank in public.

Luckily, as I’ve gotten older my “glow” has subsided, and I know when to stop drinking so I don’t look like a tomato. On those rare occasions where I do get the glow, I just tell myself that I’m Bruce Leroy from 1985’s The Last Dragon.

When I was about 10-years-old my mother gave me a home perm. I was ecstatic to finally have curls because my hair had always been so straight and lifeless. Then two days later the perm was completely gone, and after an hour of crying I was back to the side ponytail and pigtails that had defined my hair since forever.

Just like every Asian, I was born with super straight and dark hair. It was also really thick, so my brother would call it horse hair and pull it whenever it was in a ponytail. I was so jealous of women with natural curls and wavy hair because mine was so plain, and I had so many baby hairs that flew from the side of my head like tentacles. Plus, my hair was really dark, so whenever I tried blonde highlights or color, it looked like a pumpkin had exploded on my head.

After years of trying various hairstyles and colors, and bangs, and layers, I finally accepted the fate of my hair. Since it grows quickly and is pretty healthy, I even donated eight inches of it to Locks of Love after my wedding. So even though it may take half a can of hairspray to hold a curl, and it looks like a horse’s tail when it’s up, it’s mine, and I love it.

Just like almost half of all Asian women, I was born with single eyelids. That means I have no crease above my eye and absolutely no use for eye shadow. Other women who have “double eyelids” have very wide, open eyes and have no problem applying a plethora of eye makeup. I have to admit that when I was in high school, I was extremely bothered by the fact that any eye shadow I applied got lost in the abyss that was my eyelid crease. But as I got older and I had more important things to worry about, like bills, I realized that I could save a lot of money by not buying eye makeup.

I also read a disturbing article about South Korean girls’ obsession with double eyelid surgery, and it reinforced my stance on accepting myself as I am. I personally think that Asian women are beautiful as-is, and they shouldn’t try to make themselves look Western, but to each her own. I’m happy with my slim eyes!

Despite struggling with my identity when I was younger, I definitely feel more connected to my Korean heritage as an adult. I’m proud of where I come from, and I love my Asian features.