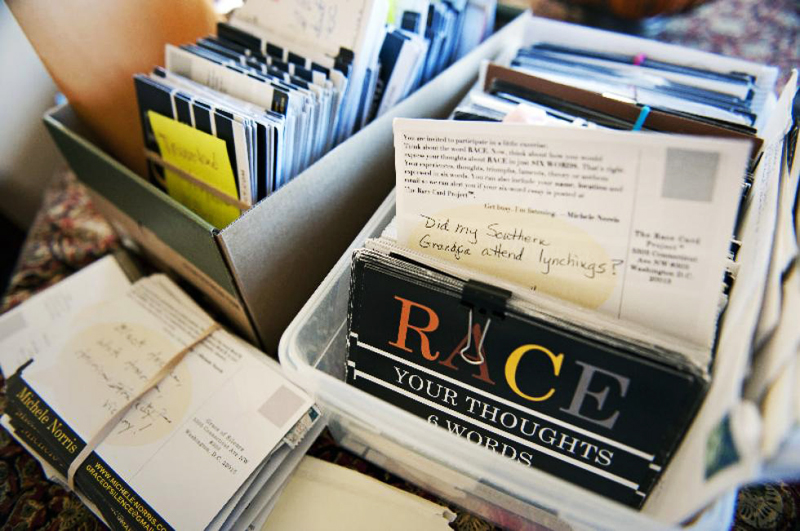 Have you ever wanted to share your personal experiences with racism or educate others about your cultural identity, but weren’t quite sure how to do it? Do you think you could challenge yourself by expressing these thoughts in six simple words? Now you can, thanks to The Race Card Project.

The Race Card Project was created in 2010 by Michele Norris, award-winning journalist and host of NPR’s All Things Considered. Norris created the project after exploring her own racial identity in the book, The Grace of Silence. Norris’ parents, who are African-American, had sheltered her and her siblings from the racism that they had encountered in Birmingham, Alabama. After uncovering these painful secrets, Norris was curious to see if others had experienced similar stories.

She started the project during a promotional book tour, asking people to write their experiences with race on the back of a black notecard. They could only use six words.

What started out as a few cards in the mail turned into a cascade of emotions and experiences filling up her email inbox. The project soon became something much bigger and more profound, and people from around the world began sharing their stories with her. With such a massive response, Norris decided to create a website for these “race cards” so that everyone could see the stories.

“The submissions are thoughtful, funny, heartbreaking, brave, teeming with anger and shimmering with hope. Some will with make you smile. Others might make you squirm. And there are a few that might make you wonder why they deserve a place on the website’s Race Card Wall.” – Michele Norris

The best thing about the site, besides being able to read and relate to the powerful stories, is that you can submit your own race card here. As someone who is half white and half Korean, I have dealt with racial and cultural issues my entire life. I wasn’t fully accepted from my peers when I lived in Korea, and I felt like an actual foreigner whenever I visited my grandparents in rural Oklahoma. However, I learned to love my identity, and to accept that not everyone is open-minded or open to change.

Here’s the card that I submitted below:

I highly encourage you to check out The Race Card project and to share your own six word submission on the website. In your free time, please browse through the cards. I promise that you will experience every emotion imaginable, from shock and anger to hope and happiness.

In addition to the website, Norris has partnered with NPR for a series that interviews people who have shaped history about their thoughts on race in America. Here’s a hopeful story from the daughter of 1963 Alabama Gov. George Wallace, who will forever be known for his “stand in the schoolhouse door.”

To learn more about Michele Norris you can visit her website.